I have been working at Leif Johnson Ford for a year this month. As their social media rep, my job title includes blogging, taking pictures and talking to plenty of strangers. Oh, my name’s Christina, by the way. I’m the one usually behind the lens (and words) of Leif Johnson’s social media. I’d like to step to the front for a moment to share just some of the things that working at this family-owned, 60+ year dealership has taught me. 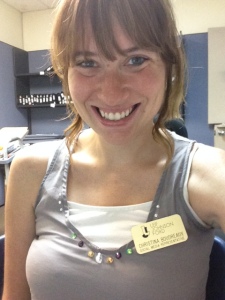 Part of my job entails going up to people I’ve never met before and asking them to take pictures, or to share their experiences. Being someone who hates rejection, this was a little intimidating at first. Sometimes there’s an awkward pause. Sometimes people say no. But most times people smile, or laugh in excitement, or simply say ‘yes.’ Sometimes they can’t wait to share what makes their Ford purchase so special to them. I’d have missed out on a lot of priceless vehicle-buying moments if I’d been too scared to just ask.

To tell you the truth, my vehicle knowledge was lower than sub-par when I first started working at Leif. But now I can tell you all about the aluminum body and fuel efficiency of the new Ford F-150, or how the 2015 Mustang is designed to look like Mustangs of decades past (but with more tech-savvy features.) Most importantly, after a year of working at Leif, I can honestly tell you that Fords are some of the most reliable, dependable vehicles out there. They really are ‘Built Ford Tough.’

3. Everyone has a story

Like the man in service who has worked at Leif for nearly as long as it’s been a dealership, who remembers Austin before Austin was the cool place to live. Or the woman buying a roomy Ford so she can take her dogs to compete in canine beauty pageants. Or the men buying a new F-150 for their brewery based in Alaska. Or the sync tech who has travelled the world, now working at Leif not necessarily because he has to work, but because he wants to. Everyone has a story. We just have to learn to listen.

Car dealerships get a bad rep. That’s just how it is. We as people often want to share our bad stories over the good ones. It’s much easier to take time out of the day to write a review when fueled by irritation or annoyance. What these reviews don’t show is what go on in real life every day; The smiling customers, the repeat customers, the overly satisfied customers, the customers who have now forged a friendship with their salesperson. I have seen firsthand that this is the norm at Leif Johnson Ford. Though Leif may not be a perfect dealership, it is a dealership that truly cares. I have watched managers go out of their way to make a situation right, have seen the way employees take care of one another, have taken note of the comradery and laughter that comes with a team event or potluck. Cheesy as it sounds, working at Leif really is like working with a huge family. Being a part of the Leif Johnson team has reminded me that there is good out there, but we’ll probably always hear about the bad stuff first. That’s why it’s important to always take the extra time to search for the good.

To wrap it all up, working at Leif Johnson has taught me to better love and understand Fords and the people that drive them. It’s a pretty sweet gig, y’all.